The Next Big Thing

[I was tagged by Susana Gardner. Bc the world’s spinning so quickly now 5 years ago is vintage.]

THE NEXT BIG THING

What is the working title of the book?

It’s called Virginia or the mud-flap girl but at times was also Shell keep., Ancient Celebrity Tune-rot, and fleece pimsy. 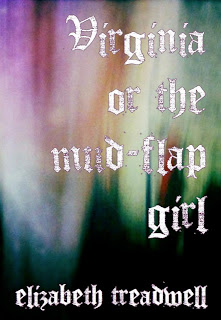 Where did the idea come from for the book?

My interest in the true histories of our continent (North America); mythology; feminism or the female line; and of course, celebrity and royalty. A long-abiding interest in Pocahontas and in Elizabeth I, real women whose lives were so powerful as to be on the level of myth.


What genre does your book fall under?


What actors would you choose to play the part of your characters in a movie rendition?

I love this question, but they are already playing themselves throughout and it’s already a film – the names of celebs are the titles of a lot of the poems in the first section – Uma Thurman & so on. Here though, is a fun star map…this is from a play I wrote ten years ago, La Gnossienne, with Dana Teen Lomax as Aphra Behn; Yedda Morrison as Djuna Barnes; Carol Treadwell as Jean Rhys; and Sarah Anne Cox (pregnant with Phaedra Cox-Farr) as Gertrude Stein (note her little dog too). Bc it's all one project in the end.

One of the best things Sarah Anne Cox ever said was that watching Woody Allen’s Midnight in Paris was like playing with Barbies. It was enjoyable but the guy has absolutely no sense of Gertrude Stein or Djuna Barnes, sorry. I’m waiting for Hollywood to step up to the plate with biopics showcasing the glamour (in the archaic as well as contemporary senses of the word) of actual women writers and adaptations of the works of women. Where is the James Franco version of Audre Lorde’s life? Bc really the male Beats can go home by now with their gap ad selves. Where are the vast screen adaptations of Eliza Haywood’s works? Etc. It’s a disservice to the women who made that place, for example the great genius Anita Loos. It’s a loss for us all, and it is no accident, it’s the suppression of the voices of so many. It’s no fun either!


What is the one sentence synopsis of your book?

We are all aristocrats, per Lord Buckley.


How long did it take you to write the first draft of the manuscript?

5 years, plus all the time I had to think and learn before that.


Who or what inspired you to write this book?

Gertrude Stein, Mae West, Toni Morrison, Paula Gunn Allen, Barack Obama. My fellow Americans ☺. Vine Deloria Jr.’s quote: “We should be making a determined effort to move forward in the creation of a continental culture that understands itself as a totality and a novelty whose only concern is developing forms of existence that provide everyone involved with a sense of integrity and identity.”


What else about your book might pique the reader’s interest?


Who is publishing your book?

Dusie Books put it out last year. It’s my second book with Dusie.